NOTE: Authenticode RSA certificate is no longer required, but installing RSA Certificate with "EB06BA22 6FB31CD3 787A2ABB 84E71D61 F1CEA5B9" thumbprint to the Trusted Root Certification Authorities store on current user is still recommended. This certificate can only be used for Authenticode purposes and cannot be used to create intermediate or subordinate, or end entities certificates.

NOTE: For WIndows 7 users, if you're having problems with validation/activation, Windows is probably not using TLS 1.2 to communicate to my site. Check the following registry key, as shown in the image:

First thing to do is ensure all updates are installed. If you don't see TLS 1.2 key, create it, then create the Client key under it. The two DWORD values must exist and should contain data as shown in the image. Restart WIndows and try again

The recent release of Launcher PRO 3.0, and the re-release Launcher 2.0 BFU_XODE edition, is digitally signed and conforms with Windows Authenticode. Why do I need it, or the better question is, why do you need it? Authenticode or digitally signing a file ensures that the file is exactly how I released it when it gets to end users. It ensures the integrity of a file.

This only works if the user actively checks it, though. I have been signing every releases, but it's only the last release where I actively check digital signatures.

I'm honestly surprised to learn that there's a good number of people who doesn't know what it is, how to check it, and what it is for. Along with those, there are also some people who casted doubt and hurled accusations as to what my real intentions were.

I find it both humorous and preposterous at the same time, that these people would even insinuate that I'm up to no good. I mean, I've been doing this for a while now, and starting something nefarious just doesn't make sense, and just not my style. They're trying to cast doubts, but really, they don't know a thing about digital signature.

Anyone can check for themselves. If you check the digital signature by right-clicking the executable: 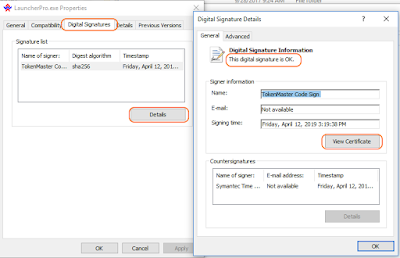 If you click View Certificate, you'll see the following: 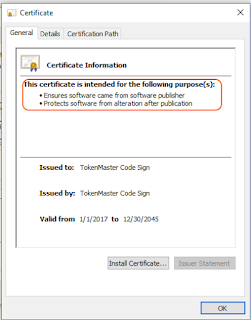 The intended purpose of the certificate is important. As you can see, it's sole purpose is limited to digital signature, nothing more, nothing less. It cannot be used for server identification, create or issue or sign another certificate, or server or client authentication, or encryption/decryption, or anything else for that matter.

In short, the certificate cannot be used for exploit such as Man in the Middle (MITM) Attack. It's just not possible. Besides, for MITM to succeed, you have to be really stupid and do several things before it even initiates. Things that Windows Defender or modern browsers will reject.

These talking heads just want to insinuate things, but don't know jack.But I'm glad, because it forces me to look for better alternatives.

The only reason I'm using a self-signed code signing certificate is that it costs a lot, $200-$400/year, with the Extended Validation costing twice as much. I'm not going to spend that much penny.

Having said that, I decided that installing the root certificate is now not required. I found a way to validate digital signatures without needing to trust the certificate first. Obvious drawback is that it's less accurate and slower, and not at par to the level of security I intended.

The installed certificate can be removed by following these instructions:

The next version of Launcher PRO will incorporate this. The repacked Launcher 2.0 Build 162 already have it.

I hope I shed some light into this. And again, nefarious stuff are not my thing, matter of factly, it's the opposite. My Launchers don't load modified files, remember?

First and foremost, anyone on V3.0 should totally ignore this. This is a legacy app that isn't maintained, absolutely old and should be completely forgotten. Still here? Keep reading then.

So, why release it then? Well, some enterprising individuals, unscrupulous, disgusting individuals, decided to make money out of older versions of E-Sys Launcher PRO. One stole the code and decided to slap a different UI and started selling it for a lot of money. Others decided to make their activation code generators and started selling it. These people frequent forum and jump at every opportunity to peddle their stuff, like a rabid dog trying to get to a filthy bone. They send unsolicited PM/DMs, and without shame, would directly post a for-sale threads.

See, they managed to scam a lot of people, and a big number of these people think they bought their tokens from me, and would demand for activation codes. They would get mad if I don't give them activation codes. There were quite a few who were really pissed and would accuse me of scamming them. So messed up.

It's time to put an end to that. I'm sick of these people. I thought "Honor among thieves" were a thing. Apparently not when it comes to money. These sick individuals can't come up with their own solution, so the best they can do is to rip someone else's work. This is mainly the reason why I lose interest in all of these. There are so many things I wanted to do with my tools, but these cretins not only stole my work, but my drive to create tools. My drive to advance development.

Anyway, it seems these morons are making money out of V2.8.1, so I'm giving V2.8.1 away free, in the form of V2.8.2 BFU_XODE Edition., as a Big Middle Finger salute to PaulX, oemnavigations, dconer, and all disgusting eBay sellers and a few other similar bottom feeders. These people are absolutely disgusting. BMWdriva is the worst of his kind. That piece of shit, sad excuse for a sub human, is stealing oxygen.


No support of any form is provided, and zero fucks given.


UPDATE: 06/20/2020 - Uninstall the old version, download and reinstall the new, repackaged version and the updated BFU_XODE.EST
Posted by TokenMaster at 6:16 PM 230 comments: