I've been playing with a friend's G01 XDrive these couple of days, (well, it's been more than a week, but who's counting?). No serious coding yet, just taking a look-see at what can be done with it.

G01 is really nice. It's small enough to replace a sedan, but not big enough to compete with a family SUV. I like it, so much so, that it gave me enough motivation to go and shop around, and shop around I did. I've looked and test drove a couple of G20s. I like the G20, so much technology squeezed into that little car. However, I'm still more impressed with the G01, even with its older technology. I know it will have the Live Cockpit Pro and ID7 in the coming builds, so G01 will have all the same bells and whistles that the G20 has.

Did I say I like the G01? YES, I like it. I like it so much that a new G01 will be coming home with me soon :(  Just deciding between BSM, Alpine White, Mineral White. Leaning towards BSM, like my F30. I wish I can turn off XDrive. I mean, in my suburban settings, I hardly have the need for it but I want it, in case I need it.

I can hear a voice screaming inside my head: "Ahhhh, noooooo, wait for a couple of months and you'll have all the good stuff the G20 has!!!!!". F*ck my EQ,  I wanna drive it NOW!!! Giving up the i3 for it. I think I'm OK with that trade. That thing depreciates like crazy, though.

I detailed my F30 last weekend, to help me contain my excitement. She still runs like a champ, and she aged gracefully. After getting in a G20 though, it does feel really old.


And you know what else it motivated me to do? Dusted off NCD/CAFD Tool. The tool is so outdated that I see a lot of inaccuracies, and the "What-If"s functions are really crawling. Of course, the format of NCD and CAF files have changed a little bit too, and so are the rules for functions. 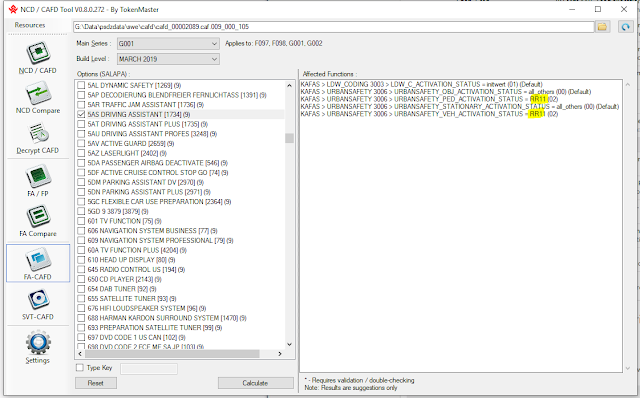 I just want to quickly bring it back to life, so I plugged in the components from Launcher PRO. It has so much dependencies on it, but it gave me the benefit of quickly analyzing the G-series stuff. So far, so good. I can see some minor issue with mapping though, but that's just given, the way we do things.

I can't wait to fully analyze the CAFs on this G01. Hopefully, I can enable and test some stuff soon, in preparation for my own car.

There's quite a bit of changes to this version, mainly, handling of JVM, less memory utilization and minimal use of temporary files. There's still tons of room for improvement.